In the 3rd part of this series, I take a look at the – from my point of view – most important part about my market value data journey: Does the team market value holds some predictive power? If so, I could use it as another feature for my predictive models.

In a past series I tested two models, which just used the goal superiority and the points per game features to predict the result of a football match. But this time I will use the market value. Therefor we need to define the market value superiority, which is basically just the difference between the home and the away team.

The next steps are basically the same like in my older series. There I explained some things in more detail. So if you e.g. don’t know, what a correlation test tells you, you should start with these posts.

The data for the correlation test and the regression models can be extracted with following SQL statement:

As a prerequisite, you should have followed the 1st post of these series.

The last months I just used Python. So it’s a good moment to restart my R-Studio. Loading the data is easily done with the Exasol R library. I already have written,  the market value superiority distribution got very long tails. So very high and very low match rating clusters have less matches. The percentages spread very widely because of the law of small numbers. 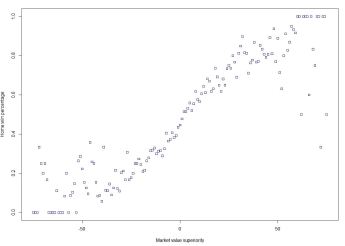 The market value superiority shows a really strong linear relation to the home win and away win percentage. Cutting the long tails even increases this relation. The draw percentage does not have a linear relation. But that’s not surprising. Draws normally have a polynomial relation.

Nevertheless, it would be interesting to test a betting strategy just based on the market value. Therefor I created three different linear regression models.

The linear regression model looks really good for home and away wins. Of course, otherwise the correlation test would have been worse. But for the draw model, a polynomial regression model is needed as the data points are not distributed linear.

These models can now be used to predict the outcome for matches with a specific market value superiority ratings. In my example I used all seasons except the current one to create the regression models. The season 2018/19 was than used to test the predictive power. But as expected, the market value just contains to less information to have a competitive predictive power and gain a profit over long term.

I tried several different combinations: Just betting on relative even games based on the market value,  don’t bet extrem long odds, just take bets which indicate a higher value. Nothing showed profitability. But that’s ok. I did not expect to find the holy grale, when getting all this market value data. I just wanted to get another feature with some predictive value, which can be used to extend and hopefully improve my existing model.

The complete R script for this post can be found at GitHub:

One Reply to “A data journey – market values (part 3)”